1 Fin Vs 3 Fins. How To Decide How Many Fins Your Paddleboard Needs 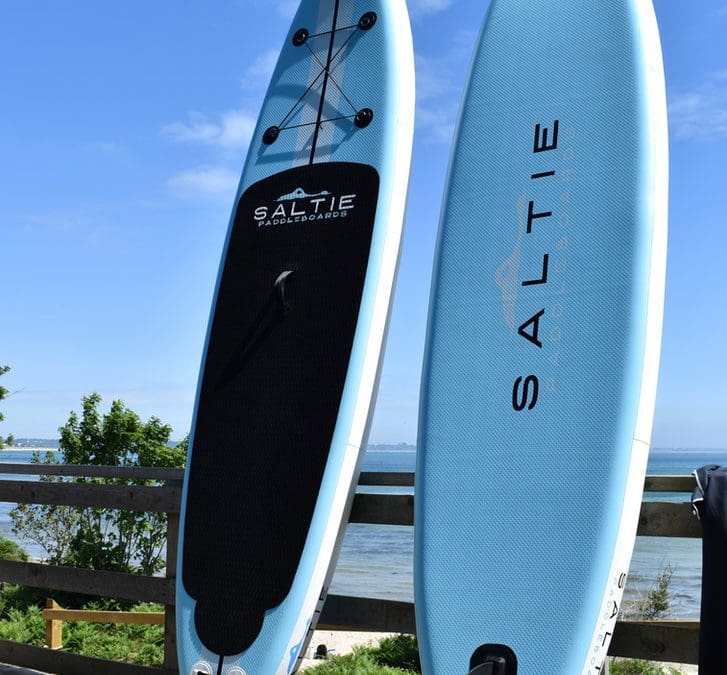 Most people know that SUP fins are essential on a paddleboard to help it glide through the water, but lots of people don’t know why or how many they should have for optimum performance. Everyone has a vague understanding that they help the SUP go in a straight line and give it a bit of control. But, most people don’t know much past that information and don’t know the benefits of having 1,2,3,4 or 12 fins (ok, they probably understand 12 is going to be more of a hindrance).

We thought to help understand the pros and cons of more or fewer SUP fins, we would put this post together. So, read on to become an expert on how many fins your SUP needs and if 1 fin or 3 fins is better for a SUP.

If you’ve ever lost a fin (and, let’s be real – who hasn’t?), you’ll know that without your fin your board spins from side to side and it’s extremely difficult to paddle in a straight line. The reason for this is because the fin acts to prevent the tail of the board from slipping sideways as you put pressure on either side of the board as you go through your stroke.

Also Read: ,Top Tips To Find The Best Paddleboard For You

Fins add tracking and stability to your SUP. In general, larger SUP fins with wider bases and longer front edges will go straighter and provide more stability than ones with smaller fins. However, a smaller SUP fin can provide better freedom of movement. There are several different fin setups that your paddleboard might have. Below, we have compared the different types alongside the pros and cons of choosing this style.

One middle fin at the tail of the board. A single fin provides good tracking and minimal drag, making it a good choice for flatwater paddling. Large single fins create a definite pivot point making it easy to turn your board.

Three SUP fins all of the same size, one in the middle and one on either side. This setup promotes straight tracking on flat water and is easily controlled in the surf.

Has the main middle fin at the tail, but also two smaller fins, called side fins/ thruster fins, on either side of the main fin.

Also known as a quad, this features a middle fin and 4 thruster fins.

How many fins you want depends on what you plan on doing with your SUP. 1 or 3 fins on a SUP are the most typical type that you will find on the market, both of which have pros and cons. As previously mentioned, 1 fin creates minimal drag and makes the SUP easy to turn, 1 fin boards are also ideal for flatwater paddling and practising your skills on reasonably calm waters. A 1 fin board will be easier to turn than a 2,3 or 4 fin setup. However, the main advantage of a single fin is the speed that it can produce due to the less drag it produces. The main con to a 1 fin SUP is that they can sometimes feel unstable, balance and control are a bit more reliant on the rider.

A 3-fin setup, also called a thruster, promotes straight tracking on flatwater and offers good control in the surf. They prevent the tail of the board from slipping sideways as you put pressure on either side of the board as you go through your stroke, making it the ideal option if you’re looking for a slightly more advanced iSUP. The main con of a 3-fin SUP is that there is far more drag than a 1 fin.

Now that we understand the difference between 1 or 3 fins on a SUP how do we put the SUP fins in place?

How to Install The Fins

Thankfully, putting your fins onto your inflatable SUP is a lot easier than it sounds. Easily snap them on with no equipment and you’re good to go!

First, prepare your fin by making sure it isn’t pushed all the way to the front or back. You want a very tight and secure fit to make sure that your fins stay on during your saltie trip.

Secure it. Take your fin and make sure that the knob side is placed in first.

Wiggle your fin. Give it a few wiggles to make sure that is properly in place.

Listen for the snap. You’ll know when your fin isn’t going anywhere if you hear a loud snap. Don’t worry you haven’t broken your fin! It’s just your board letting you know that it is securely in place.

So, is 1 fin or 3 fins better for a SUP? If you are just starting, then we recommend opting for a SUP with 1 fin due to its reduced drag and ability to turn easily on flat water. If you are an experienced SUP’er looking to tackle more rocky waters, then a 2+1 or a 3 fin setup will serve you best.